A be-daisied and slightly damp outfield met the eye as Camden’s opening pair of Messers Hodsdon and Mitchell kicked off proceedings in what turned out to be an unusually close match. Both treated the bowling with perhaps slightly more respect than it was due, the score seldom exceeding the overs in the first seven overs. Slow and steady wins the race and all that. It was, it has to be said, a slightly odd wicket with the ball not coming on with any speed. Couple that with a densely grassed outfield and the President’s unerring accuracy to pick out the fielder and you can see why runs were at a premium.
20 overs in and Camden were sitting at 55-0. 20 overs left and all wickets standing. Five an over would give us a decent 155 to defend. A comical run out saw Ramesh with his new bat join Dave. Not Ramesh’s wicket. A nudger, dabber and nurdler of international repute, slowish bowling and a sluggish outfield weren’t going to offer him up many quick runs: 13 from 33 before his pads were rapped and the slow walk back.

Sourav gave the innings some fuel-injected long handle with 26 from 26 balls before Hridoy and Ritish closed out the innings, helping bring up 80 in the second half of the innings.

The last time Fulbourn batted against Camden they didn’t so much as fill their boots as gate crash a Doc Marten’s factory and fill all their boots too. Reports of that game are sketchy. It’s kinder not to revisit the event other than to say that that was then and this is now. Armed with the new ball, Ginto and Kashish offered plenty for the Fulbourn lads to think about, especially Edward Barker, who previously – without recourse to nudging, dabbing and nurdling, one assumes – helped himself to 186 runs. Not today though. Ginto bowled a short one outside off stump which he obligingly redirected on to his wicket. His average against Camden now stands at a weedy 90. Much to the batsman’s credit he seemed to have a sense of humour, something that was much to the fore when later on in umpiring mode he fired out one of his team-mates with a ball that according to our human Ball Tracker Hodsdon would have done well to worry another set.

The amiable Ed has quite the look of a young Fox-Teece about him. Heavily barneted and bearded, he is a comfortably proportioned 24 year old, which immediately set me wondering about Foxy’s whereabouts 25 years ago. However, young Ed is a relative newcomer to the South Cambs scene, and what with being a Maths graduate and about to embark on a Masters in Animal Behaviour perhaps makes him an unlikely genetic match for MF-T. You can fill in your own jokes about animal behaviour.

Early breakthrough and decent bowling notwithstanding, Fulbourn made untroubled progress, reaching the midway point at 77-1. Five catches– that’s half the wickets needed chaps – were grassed, four dollies and one nasty swirler but even so. Five. Something had to change and that something was Sourav, who finding himself at first slip pulled off two splendid catches. As fans and followers of the Junior Leagues are aware, first slip is usually there for decorative reasons or as something to aim at for the bowler. At the very least, they give the keeper someone to chat to and – I dunno – it makes it look as if we know what we’re doing to have one. What’s not expected are game changing feats of coordination. And all this with a dodgy shoulder. With a negligible run-rate needed, it was clear that in order to win, Camden would need to bowl then out. Sourav’s fly paper palms provided two of them off Yogesh’s bowling, Umpire Ed chipped in with a generous LBW, a mad run out provided another and holy moly, Camden were in it. From 119-4 and cruising, Fulbourn were up against it and facing one of the league’s less celebrated death bowlers. Cometh the hour, cometh the Mitchell. 127-6 and loads of overs left. No problem. Lob one down, see it hammered into the deep and then gasp as Ramesh swooped to take a low one that was dying on him. Seven down, three off the over, six needed. No wickets from the next. Back to the President. Three runs needed, three wickets required. Make that two wickets as the first ball saw another deadly strike, this time to a catch from Ginto. A dot. Another wicket! This brought their most junior player to the crease. Just one ball and Camden were in with a chance. To the lad’s eternal credit, he saw the ball, whacked it out to midwicket, scampered the run and left his more experienced colleagued to see the chase off.

A one wicket defeat. In truth, if Camden had won, it would have been the first time in the game that they’d been ahead. But what fun to have taken it that far and to have kept the game alive. I wish I could do better but:

It’s not over til it’s over

It’s a game of two halves

I hope that later in the season, they’ll be another phrase that’s been overused: Ct Sourav B Yogesh. 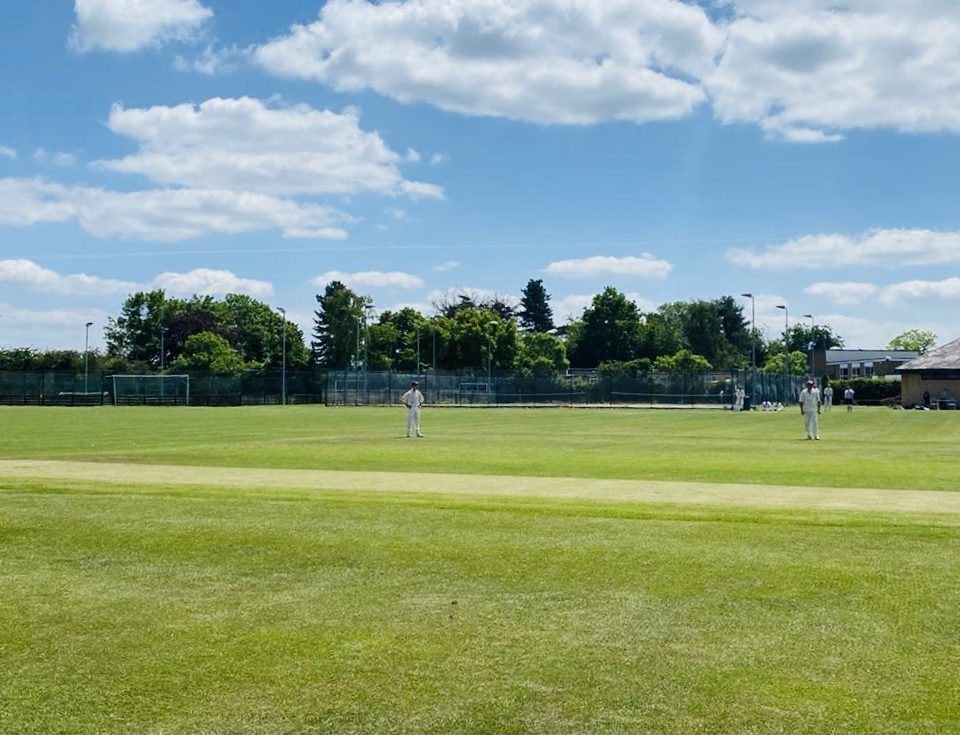 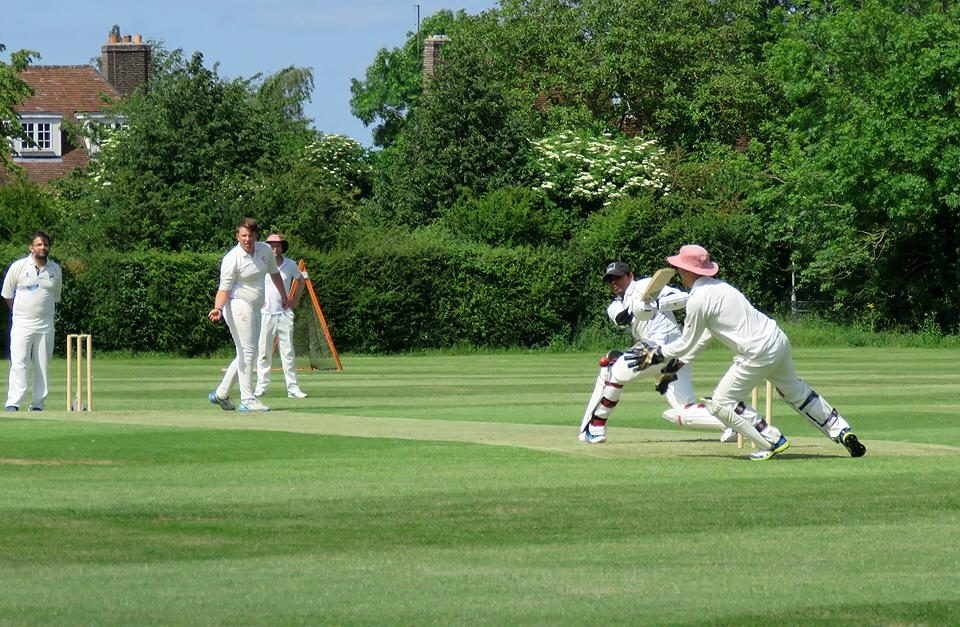 Camden vs Madingley (Away) – THREE ON THE FLOOR, ONE HOSPITALISED IN MADINGLEY MAULING 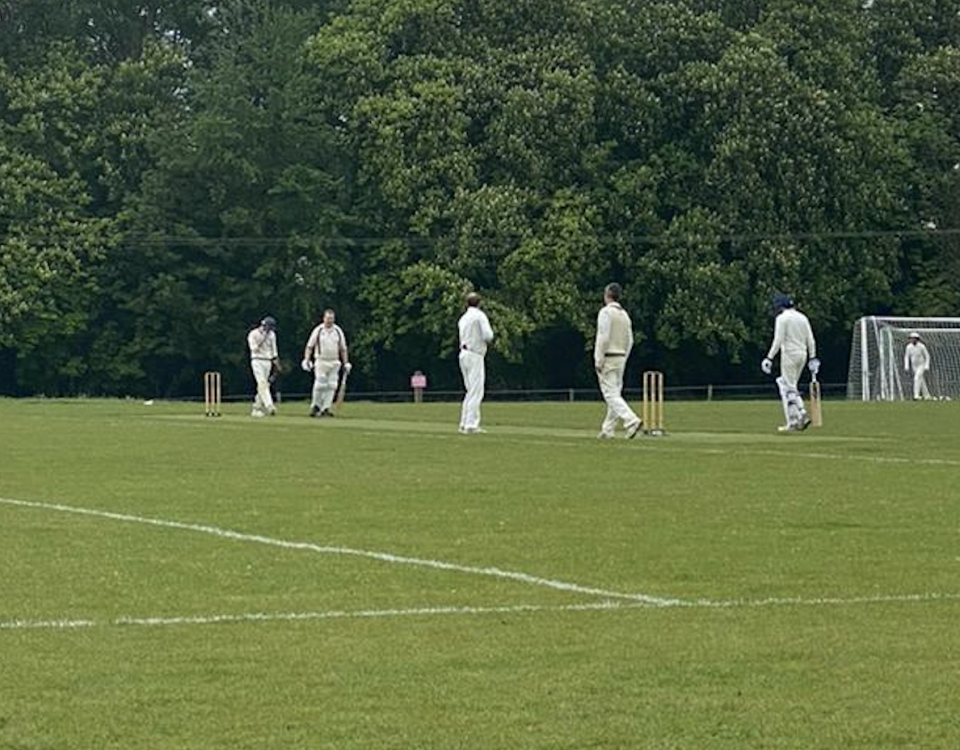