At Cottenham, winless Camden were delighted to encounter more blue skies and, for the first time this season, a pair of sight screens. Captain Redders won the toss and had no hesitation in following the ‘bat first, get millions’ mantra.

The returning Fox-Teece made for a reassuring presence at the top of the order, but it was to be all too brief. One drive to the cover boundary was enough for the sleep-deprived father of two to think he was Viv Richards, bowled next ball trying to whip the left-arm opener through mid-wicket. Against accurate and quick enough bowling on a grabby pitch, Redders, with 4 from his first 20 balls, was content to play himself in. Such pissing about was initially eschewed by Sutton, who compiled 11 from his first 15 balls, but Camden were finding it tough going at 19-1 after eight overs. The natural order of things was quickly restored, however – Sutton content to play second fiddle as Redders reeled off 52 from his next 44 balls. The skipper’s computer remains kaput, but it emerged that Rachel Riley has been keeping abreast of the Syndicate man’s statistical exploits. The leggy blonde Countdown star could barely contain her excitement on Monday, tweeting to her 667k followers that “My favourite Camden player went past 3000 Thirds runs at the weekend!!!!” The landmark was reached with an attempted swipe to leg that flew to the third man boundary, underlining the point that it isn’t how you get ‘em, it’s how many. 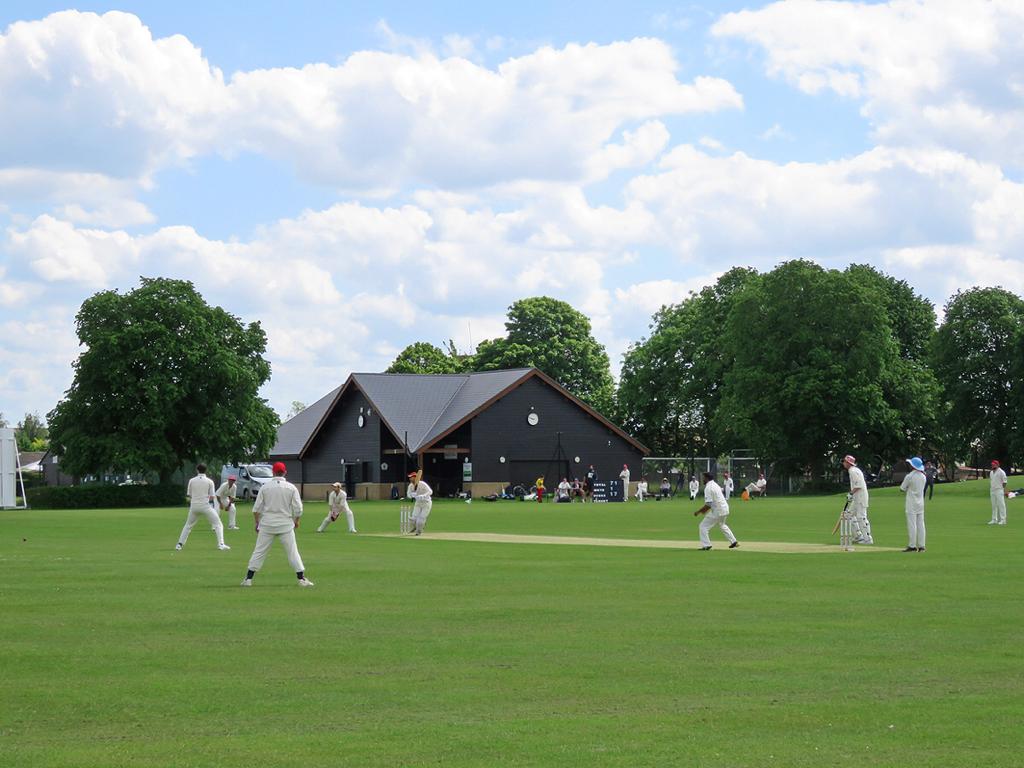 At 82-1 at the halfway mark, the visitors were handily placed. So it was a shame when a season high stand of 86 ended with the wicket of the skipper, and alarming when Adler came and went. Fahim (13), with a sweetly-timed straight drive, hit the shot of the day – but the customary collapse was on. From 90-1 to 130-7 as Sutton (40), Karan, Vish and Liam all fell in the attempt to up the run rate. Welcome to Camden, Krishna. If the stylish left hander had been shocked by the carnage at the other end, it didn’t show. With Kelsall (22) for company, the Bulusu upgrade hit 23 not out as a quick-fire 32 for the ninth wicket helped boost the total to an imposing 175-9.

As they had at Sutton, Vish and Kelsall took the new ball – thus bringing the Redfernian record of original openers to an end. Shorn of his lockdown locks, Vish (1-15) didn’t appear to have lost his strength, but the same couldn’t be said of his luck. Two presentable chances went down off successive deliveries, and it was left to the captain to show his men how to catch. Meanwhile, Kelsall (2-18) relied on a less collaborative method in taking a wicket in his first over, and the bustling education executive went on to bowl his eight overs straight through. Such exertions weren’t enough to keep him quiet, however.

Cottenham’s 50 came up in the 19th over, bowled by Karan, but there was to be another landmark moment later in the over. The hosts’ number five only had 4 to his name, but had shown enough to suggest that he could bat, so Krishna’s fine run out felt vital. Memories of Camden players being capable of such dynamic fielding are certainly thin on the ground. Baker replaced Karan, the wildlife supremo luring a stumping for Adler to take in a fashion that the Big Aussie Unit was keen to see described as anything but ‘Gibbo-like.’ Redders, in replacing Kelsall, had kept things relatively quiet and was rewarded with the wicket of his opposite number – the first of two catches for Sutton. Nobody could have known it, but the Camden skipper was just getting started. In the event, those fans who had wisely left early to avoid the post-match traffic were also spared the ordeal of witnessing a Redfern hat trick. When Vish joyfully held the hat trick catch, there was no doubt about the destination of the coveted man of the match award, but nobody wanted to see Redders (4-15) get a 5-fer as well. Liam was summoned to take the winning wicket, and the one- man youth policy duly obliged – sealing an emphatic 90-run victory.

Cue jubilant scenes in the garden of the Rose & Crown in nearby Histon, where news of the Second XI came through. Apparently, Club President David Mitchell had nearly pulled off an unlikely victory – with [checks notes] the ball, the portly run machine recording the remarkable figures of 3-8. Proof, if needed after Redders’ day out, that if you play this game long enough, you’ll see it all.