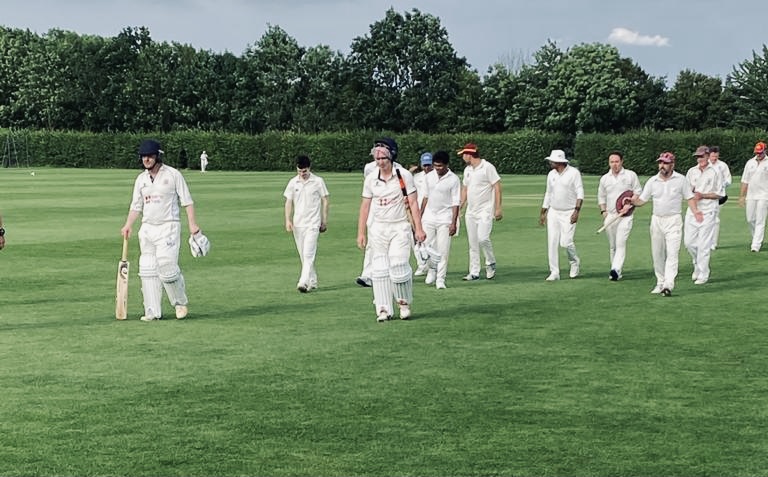 Gathering under grey skies on the Queens’ sward, Camden’s men were grateful to retain the opportunity to test themselves against their main rivals and the current highest performers in the CCA Junior 1 North wooden spoon competition. With an abysmal weather forecast persisting into Friday evening, and some interference during the week from a popular television programme, the contest has been under threat. Captain Redfern returned with hopes of a desperately needed victory – or, at least, an improvement on last week’s funereal showing. Dissatisfied with the performance of Kelsall’s dusty fifty pence piece at the previous toss, the skipper had brought with him a recently polished 104-year-old penny for the task – and the amulet did not disappoint, coming down from its singing trajectory in the opposition’s disfavour. Camden had no hesitation over choosing to bat first on a surprisingly dry and firm-looking pitch.

Adler and Redfern reunited to open up, hoping to reproduce the positive start the same pair had achieved earlier in the season at Sutton. Sadly, Adler’s positivity on this occasion led to him thumping a cut shot straight at the only man in the covers, who somehow managed to catch it with his elbow. If the walk back to the pavilion seemed like a mile, as he contemplated an unfortunate duck, that was probably because it wasn’t far short: there was going to have to be a lot of running done today. Nutt (6) also began positively, but he too soon tossed a catch, to mid-off, and Camden were two down in the sixth over. At the other end however, Redfern had been steadily accumulating, now striking a crisp check-drive over long on that didn’t quite carry all the way, but nevertheless left the purist in the crowd purring. Joined by Kawsar – who had spent the past few weeks getting his eye in batting for other teams – the scoreboard was moving along nicely, and when Redfern (27) missed a straight one from the left-armer in the twelfth over, three early wickets did not feel particularly concerning: Camden’s innings had impetus – too rare a commodity thus far – and there was plenty of talent and experience still to come.

Although the quality of the change bowling may have drawn some remarks from the spectators, there was no challenging the quality of batsmanship on display. Kawsar unfurled a series of his trademark elegant shots into the leg side, while his new partner Batley (also seeming to have benefitted from the practice the 181 balls faced in his previous three innings had afforded) was striking the ball crisply, finding the gaps, and running most competently between the wickets (“No mean feat, given the chap at the other end”, as one spectator opined). A glorious partnership of 98 came to an end when Kawsar (62) struck a majestic drive to long on, which was snaffled by the fielder just inside the rope. Batley fell shortly afterwards, the cash-strapped career student uncharacteristically prodding a simple return catch to the bowler for a jug-avoiding 49.

Those regular Thirds supporters who were unable to attend that afternoon may in time come to rue their choices: what followed was a sight for the ages. It was like rolling back the clock to the heady days of 2003, as veterans Robinson and Lee combined for a furious partnership that sealed the visitors’ fate. 59 runs off 8 overs, lusty blows down the ground – including trademark sixes for each of them – and an awful lot of scampering around took the score well past 200. Although Lee (27) fell in the final over, skying a second return catch to the visiting spinner, there was still time for Chandrasekaran to contribute another 11 runs with his legs, despite not facing a ball, leaving Robinson not out for an excellent 41.

Camden’s frontline bowlers have been excellent throughout the season, and they were duly in parsimonious and threatening form again this afternoon. Batley struck in the third over, hitting the middle of middle with a neat inswinger. Although 10 overs of obdurate defiance then followed, it was not to last. Despite once again struggling to find his line, Kelsall proved lethal when he did, Lee taking a crisp catch behind the stumps off a seaming delivery. From there on in, it was something of a procession of fenlanders, to and fro the distant pavilion. Chandrasekaran had replaced Batley (5-2-11-1) and struck in the next over, inducing a catch for Redfern at mid-off. Derekar was summoned to replace Kelsall (8-1-18-1), and the metallurgist twirler was as once again as deadly as his name implies. After Chandrasekaran (7-2-12-2) had bowled the opposition skipper with a beautiful inswinging rocket, Derekar (7-3-14-3) and Baker (4-0-19-2) polished things off, the wildlife supremo mesmerising his opposite number into leaving a straight ball. There was a brilliant run out from Adler, the informatics expert bulleting a throw from mid-wicket over the bails and into the hands of the ever-eager Lee, and catches for Nutt and Chandrasekaran to secure a huge win for Camden, bowling out the visitors in 31 overs.

Although the opposition left immediately, eager to get home in time for the aforementioned television programme, Camden’s men celebrated in the nearby hostelries. Happenstance walking a small dog in the Newnham suburbs, Hollywood starlet and lifelong Robbo fan Rachel Weiss spotted flashings of the distinctive team livery through the lush foliage of the garden at the Red Bull, and rushed in to fawn over her beer-soaked, maiden-bedecked hero. Giving a statement to our correspondent, she commented, “I’m absolutely delighted with the performance. It just goes to show what you can do with quality frontline bowling when your batsmen actually get some runs. And, at this rate, Robbo could become the Thirds’ all-time leading run-scorer before the season is out!” Responding to this later on social media, Thirds founder and railway enthusiast John Sutton is reported (the posts have since been deleted) to have said: “Load of rubbish. Which of Camden’s batsmen stood up and was prepared to play the anchor role? None of them, that’s who. Bunch of flashy southern pansies. No grit. Obviously the opposition were rubbish. Webbed feet, I should think. Anyone for absinthe?”