With reassuring familiarity, the 2022 season began as the previous year had ended, with the Casuals travelling to picturesque Chippenham. On arrival, it appeared that someone had brought a bird of prey. Had Redders picked up a new hobby? Or was it a pet project of wildlife supremo Martin Baker? Neither, sadly, the Harris hawk – identified as such by Kelsall, who had just enjoyed a holiday on the Hebridean isle of the same name – belonging to one of the home side. 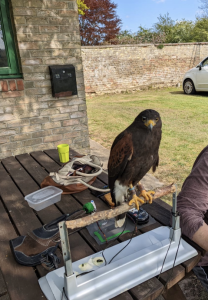 As per last September, the visitors would bat first – Redfern and Sutton again forming a creaking opening alliance, the former fruiterer reminding last year’s century-maker of the old adage that you’re only as good as your last innings. Newly elected Vice President (Cake) Hilary Sutton joined Tim and a pair of little Littles in the away end, while tech-savvy fans could for the first time follow proceedings online. They were soon questioning the accuracy of the technology, as there appeared to be a two and a couple of singles on Redders’ wagon wheel. Complaining of a tweaked buttock, the Thirds’ skipper reverted to type: six sumptuous boundaries before missing a straight one for a run-a-ball 31. Sourav Bhattacharya announced his arrival first ball with a cracking cover-drive for four, before the home side made a double bowling change. Friendly game, friendly bowling.

Hitherto becalmed, Sutton took a particular liking to the tattooed falconer’s brand of lob – regularly peppering the boundary on his way to an uncharacteristically rapid half-century. 77 had been added for the second wicket when Sourav (27) was adjudged LBW by the Bulusu upgrade, bringing debutant Nick Harrison to the crease. Drinks were taken at the twenty over mark, with the score 124-2. Sutton, enjoying the novelty of the leg-side field all being on the boundary, reached 81 before being cleaned up by one that straightened. Having almost piranha-ed his first ball onto his stumps, Steve Robinson hit a flurry of boundaries in a cameo 22, before Nick Green (23 not out) joined his fellow Nick to add an unbeaten 56 for the fifth wicket – Harrison striking a couple of mighty sixes and showing a Redfernian disdain for dot balls in scoring an impressive 60 from just 42 deliveries. With 251-4 on the board, captain Baker, mindful of past struggles and the prospect of a post-covid proper cricket tea, had seen enough after 37 overs. 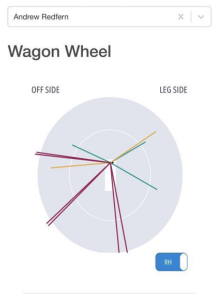 The other side of that equation was that Chippenham had plenty of time to chase down the total, although it looked liked they might not need very long when the first four overs yielded 25 runs. Kelsall then did for both openers – splaying the stumps of one, trapping the other leg before – either side of taking a rare catch off the bowling of Liam Wallman (10-2-47-1), reducing the home side to 57-3 in the tenth over. Just eleven runs came from the next five overs, as the bustling education executive and the one-man youth policy exerted some control, but the home side were still in the hunt. By the time the bell tolled six to signal the final twenty overs, Chippenham – with verbose South African Charlie Rattley well set – required 125 to win with seven wickets in hand. Backed up by some terrific fielding from Harrison, spin twins Baker and Bulusu were toiling away to no avail, and it wasn’t clear where the next wicket was coming from. The sixth ball of a Baker over, it turned out – an over that had haemorrhaged eighteen culminating in Rattley being caught by Kelsall six short of a century. The danger man gone, it was time to summon the occasionally golden arm of Redders.

With no apparent reduction to his pace, Redders has dispensed with much of his ‘run’-up, and the Thirds’ skipper was rewarded with a wicket in his second over. The following over saw Baker (11-2-66-3) induce an edge through to ‘keeper Steve Hodsdon, who was later to accept the gift of a stumping off the same bowler. The burly Marlburian’s opposite number, having slept off the worst of his hangover, had by now steered his side to the position of needing 31 from five overs. With all three results possible, Baker turned to Kelsall, in the search for the three wickets needed for a famous victory. Five wides off the first ball wasn’t helpful, but Kelsall (11-2-46-2) recovered, conceding just one run from the rest of his over, before Redders bowled Chippenham’s gloveman to dash any hopes of a home win. In the last over, Redders (6-0-29-3) – who along the way had three catches shelled – hit the stumps for a third time, meaning that the genial home skipper had three balls to survive. As the field crowded rounded the bat, the hawk looked on impassively, safe in the knowledge that the Casuals always draw at Chippenham. Nine down, six runs in arrears, this wasn’t any old draw, however, as even the ever-competitive Kelsall – for whom the idea of a friendly is anathema – had to admit.

Man of the Match: Will Sutton