Camden I V Sutton (away)

LOW ON RUNS, HIGH ON DRAMA

Bat first, get millions. The Thirds have more often than not followed that mantra, so perhaps Captain Redders could have been forgiven for not relaying the plan to his opening partner – the returning Sutton. At Sutton, in front of more Suttons, the former fruiterer certainly batted as though he hadn’t got the message – not getting off the mark until the seventh over. By this stage, his skipper – as if batting on a different pitch – had peppered the fence six times. “He did this last year. He’ll get himself out in a minute,” opined the opening bowler after one such boundary. Redders gave it a good go, but was given a life when his chip to midwicket was somehow shelled. Having reached 40 out of a definition-defying partnership of 43, however, Redders did as Redders does – missed a straight one. That brought Nutt v Nuttall. After a close LBW shout, Nuttall bowled Nutt for nut all. The returning Batley (7) and Vish (0) followed in similar fashion, either side of Sutton (9) being put out of his misery. Veteran Steves – Robinson (11) and Hodsdon (15) – briefly threatened to take the score closer to millions. Well, from 68-5 to 90-6 – enough to deny Redders the satisfaction of scoring more than half his side’s total – before a change of bowler carried on the procession of visiting batsmen being bowled down the hill. It was a pitch of two ends, as combined figures of 16.3-6-30-8 from the top end attest. Wallman (2), next to fall, and Sutton were the two to buck the trend. When Kelsall (1) was also bowled in the twenty-fourth over, Camden were in danger of being skittled out for under a hundred. But that is to underestimate the talents of Baker (5) and Austin (7*). Who knows how many more the Leicestershire veteran would have gone on to make had the wildlife supremo not been LBW in the thirty-fourth over. Still, the last stand was worth 17 and Camden – with Extras (16) second top scorer – had amassed as much as 113.

It would take something special (and plenty of cake) for the visitors to defend such a low score, but Kelsall hasn’t got to where he is today by admitting defeat. The bustling education executive was roaring in delight as early as the final ball of the first over, but delight soon turned to frustration as the home side’s other opener chanced his arm and the score rose to 32-1 after seven overs. Camden needed wickets, and Vish delivered two of them – both bowled – in the next over. Another followed in Kelsall’s next over, and suddenly, with the score 33-4, the target of 114 looked a long way away. Sutton’s number six had scored fifties in each of his previous four matches, so this was the game right here. Hunting wickets, Captain Redfern took the view that Kelsall and Vish (8-2-18-2) would bowl through, and was rewarded when Kelsall (8-2-31-4) finished his spell with consecutive wicket maidens – including the prized wicket of the opener for an agricultural 33. It could have been a first Thirds five-fer had a vociferous LBW appeal been upheld from his final ball, but the opening pair had done a fine job in reducing the home side to 71-6. Batley was greeted with a straight six into a neighbouring field of horses. And horse sh*t, but no matter – sh*t gets wickets. Sure enough, next ball, the in-form number six spliced a filthy full toss to Kelsall at extra cover, and Camden were into the tail. A tail that wouldn’t die wondering, it must be said – two more fours coming from the Batman’s eventful first over. A Redfern maiden followed, before Batley (2-28) resumed his duel with Sutton’s muscular South African number nine. The batsman cleared his front leg and swung for the trees. But he hadn’t got enough of it, and Nutt – looking into the sun at cow corner – took a terrific catch on the boundary. Catches win matches, and it appeared that the Cambridgeshire Over-50s man had gone a long way to seal this one. Nuttall had other ideas, however, and the visitors didn’t have many runs to play with. With the scoreboard reading 96-8, Redders turned to spin in the form of Baker (1-3) and Wallman. Left-arm spin has often been the secret weapon in the storied history of the Thirds, and the wildlife supremo – bowling the dangerous Nuttall in his second over – looked to have written another chapter. 110-9. Four to win. “It wouldn’t be the first time I’ve been tasked with conceding the winning runs,” quipped Redders, having been counselled into bowling after an over from the unlucky Wallman was taken for eleven. The skipper’s words came true, his first ball swept to the square leg boundary, and Camden had to accept the narrowest of defeats. Lesser teams would have stewed over the what ifs and the if onlys, but the Camden lads retreated to a nearby inn to take the piss out of each other. 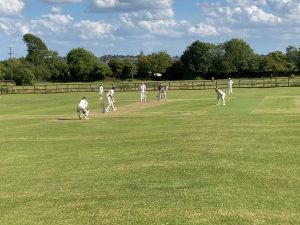 Man of the Match: The Team