Camden vs Coton (Away) – COATS OFF IN COTON, BUT CAMDEN WILT IN THE HEAT 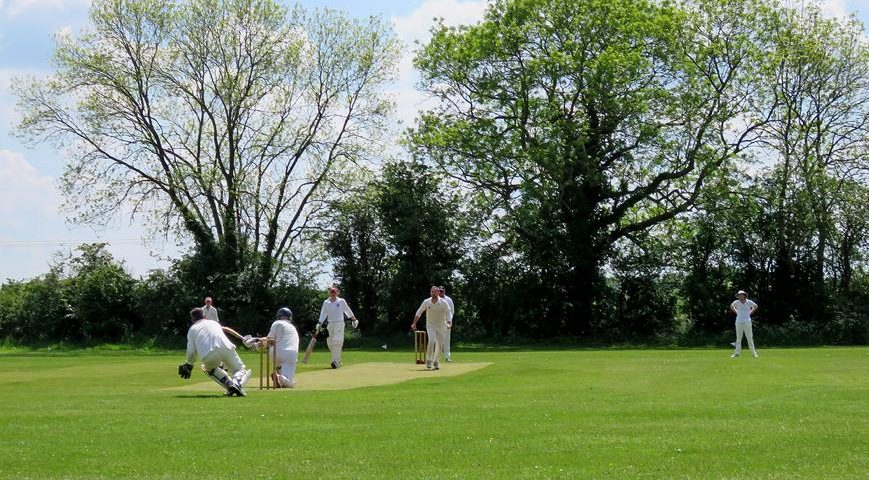 Camden had two new caps (numbers 155 and 156) as at last the sun shone, but memories of trips to Coton were not so cheering. Second best in a title showdown at the end of the 2018 season was disappointing, but nothing compared to the following year’s concession of 284, of which Coton’s popular Kiwi opener had helped himself to an unbeaten 157.

With Redders offering up a selection of pies, it looked all set for a repeat before Vish, who had already dismissed the other opener, got the hosts’ big fish – clean bowled for 21. Latecomer Kelsall came on, the bustling education executive seemingly determined to spoil Chris Clarke’s day by bowling a relentless leg side line. As is the case with sultry Colombian songstress Shakira’s hips, however, the scorebook don’t lie, and the long-serving Camden gloveman – another whose hips (or what’s left of them) don’t lie – can be proud that only 8 of the 37 extras conceded were recorded as byes. Less pride could be gleaned from Sutton’s drop, but runs from the bat proved elusive while Kelsall and the ever-parsimonious Karan were bowling. With 19 overs gone, the home side had reached 63-3 and the game was in the balance. Time to summon the left-arm lob of Martin Baker. 15 from the first over was perhaps not what his captain had in mind, but the wildlife supremo soon found his rhythm. A fourth wicket partnership of 74 came to an end when Sutton clung on to one off the bowling of debutant Ginto George (2-50), but runs were continuing to flow from a youthful middle order. Karan (2-19) returned to put a brake on things, and Vish, filling his new boots, claimed a further two wickets and fantastic figures of 4-25 – but Coton, aided by 22 wides, finished with too many. 196-9, to be precise.

Camden’s pursuit began in disastrous fashion – Robinson and Redders bowled, the scoreboard reading 6-2 after three overs. Whoever had hamstring in the ‘which bit of Sutton would fall apart sweepstake’ was grateful to the sniper in the trees, the shot muffled by the drone of traffic on the nearby M11 as a single was scampered. Captain Redders was later heard to say that “there is no such thing as injury in this team – only a spectrum of disrepair.” Nothing a couple of ibuprofen won’t fix. Fixing the hole blown in the Camden top order wouldn’t be so easy, however. Not when the highest partnership of the innings, between Sutton and Fahim, was 38, and not when Sutton, in scoring as much as 21, had again the dubious honour of being Camden’s tallest dwarf. Still, the bearded greengrocer could reflect that it was all good preparation for the kind of existential crisis that only working on a sunny bank holiday Monday can bring about. Debutant Krishna Bulusu (no relation) struck a sumptuous boundary before being undone by one that went underground, and Karan (14) gave a reminder that anyone who can hit his first ball for the club for 6 can, indeed, bat – but Camden, with only two batsmen reaching double digits, were never in the hunt and subsided to 91 all out in 32 overs.

It is to be hoped that the promised return next week of working-class hero Matt Fox-Teece, no doubt well rested after the birth of his second child, will help prevent the Redders reign beginning with five straight defeats. The skipper’s computer is conveniently knackered, so any notion of how his record compares to that of his predecessors remains unknown. As does the question of whether any of those illustrious names had begun their captaincy tenures with four different opening partnerships and new-ball pairings in as many games. Over a pint in the garden of local hostelry The Plough, the Syndicate man was keen to take the positives. “At least we’ve ruled out the danger of promotion. Besides, I’ve never been one to play cricket for the result.”

Overhearing all this on a nearby table, former Camden left-arm spinner Martin ‘Morse’ Burton could sympathise. “I only played for the result when Gardner offered me a win bonus.”