A few years back, Camden had an overseas pro by the name of John Maynard. In wider cricketing circles he is remembered as ‘The Dentist’ – for his propensity to knock out opposing batsmen’s teeth – and as the man who ran through England’s top-order in a warm-up game on the 1994 tour to the West Indies. A google search reveals that he is now player-coach at Newmarket CC, but Camden have an heir apparent in Tarun Narwani – the opening bowler landing a sickening blow with just his second ball at Lode. The batsman was convinced to retire hurt, while Captain Redfern could reflect on a toss well won – the morning’s rain having further enlivened an uneven pitch. Getting off the mark with a towering six, Bottisham & Lode’s number three threatened to make a mockery of the conditions, but Vish – encouraged by his skipper – was playing the long game in holding back his in-swinger. Such patience was rewarded when the long-levered batsman left one that swung back viciously to crash into off stump. Earlier, specialist mid-on Adler pouched another catch – off Kelsall, who was enjoying himself in front of what must be the biggest crowd to have witnessed the singular delights of a Thirds’ match. The bustling education executive was rewarded for an excellent spell of 8-3-14-2 (no wides!) with a wicket from his last ball, and the hosts were in trouble at 49-3 after fifteen overs. Make that double trouble, as Karan ‘Deadly’ Derekar (4-22) ripped through the middle-order. First up, the returning opener discovered the other end of the bounce spectrum – hit on the boot, plumb LBW. Three more followed, all bowled, and with the score reading 78-7, Camden were confident of wrapping things up and enjoying an early tea. Needless to say, it didn’t go exactly to plan. Quite whether Redders planned to bowl the leg side full toss that was to see the end of BottLode’s number four is hard to tell, but the skipper was relieved to see Bulusu take a stunning running catch on the backward square-leg boundary. As per last week, the Bulusu upgrade – after Vish (2-24) had returned to claim a second wicket – polished off the innings with a stumping for Hodders, who again kept admirably in testing conditions. But the last two wickets had put on thirty-two, leaving the visitors a potentially tricky 130 to win. 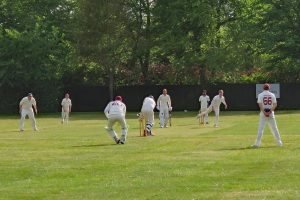 Sutton, Adler and Extras again opened up, profiting from six wides in the first over. “Long run-up, tight trousers” was Robinson’s verdict when the opening bowler later returned, but it was his action that initially caught the eye. Had he been taught to bowl by a one-armed teacher? With little scoreboard pressure, the visiting openers could take their sweet time – something which Sutton needs little encouragement to do. Adler managed to lose his form and his bat last season, so it has been an encouraging start to the season for the Big Aussie Unit. Here, a second consecutive opening 50 partnership came up in the twelfth over, before – with 71 on the board and the drinks break in sight – Adler was bowled for 35, bringing Redders to the crease. By this stage, a youthful home side had turned to their wicketkeeper to bowl some gentle leg-spin, and Redders (8, including the shot of the day) responded by hitting a full-toss straight to long off. Questioned later as to whether his eyes had lit up, Redders protested that they hadn’t lit up enough. Robinson (22 not out) joined Sutton, scampering a number of twos in a sprightly innings that took the visitors to the brink of victory. Needing two to win, the former-ex-former all-rounder swatted what everyone thought to be the winning boundary, and was busy accepting the congratulations of the opposition when it became clear that the hollering from the pavilion wasn’t in fact jubilation but recognition that the ball hadn’t crossed the boundary. In scenes that can only be termed farcical, the batsmen scampered one last two before celebrating victory for a second time in a minute – Sutton finishing up on 38 not out from a tedious 104 balls. That’s 212 deliveries faced in the first two games for the former fruiterer – a total that only five batsmen bettered in the whole of last season. “It’s like pulling teeth,” opined Andrew Thomas, who knows a thing or two about dentistry. “But at least he didn’t get a bowl, this week,” added the combustible former Camden star.

Man of the Match: Karan Derekar