The weather had improved from last week, and Vish was over a bout of Covid, but the good news ended with Cam Kerela winning the toss and opting to bat first. Another headache for Captain Redders, and the tone was set second ball – Batley grassing a highly presentable caught and bowled chance. It felt costly at the time, and would continue to feel that way for at least the 81 more balls that the reprieved opener would face. That his eighty-first was bowled by Adler, the Gold Coast Golden Arm, tells its own story. As do the 122 runs to his name. Vish (2-42) took wickets either side of a Sutton run out, but was bowled out by the time the visitors had plundered 167-3 from just twenty-four overs. Thereafter, thanks to wickets for Adler (2-41), Khan (2-51), Baker (2-45) and Bulusu (1-49), Camden did well to bag maximum bonus points. With 300 on the board, it was unlikely that the visitors would rue the failure to use all forty overs. Redders’ men, having dropped a number of chances, had plenty to rue, but the skipper was keen to put the display into perspective: “We’ve already accrued more points than we did at Coton.” And there’s always cake. 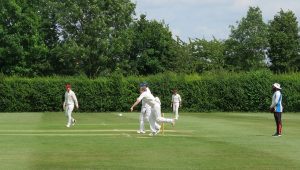 This was no time for Sutton to see off the new ball. This was the time for attack. Time for Adler and Redders. The skipper, seeking extra motivation, was even toying with the idea of making himself angry. Nicking off for 4 will do it. Time for Sutton to see off the new ball, after all. For Adler, seeing off the new ball meant seeing it off to the third man boundary, but the pair had already shared stands of 82 and 71 this season, so all was not lost – apart from the match. Here, 56 had been added for the second wicket when Adler was adjudged run out. The Big Aussie Unit wasn’t convinced, but there is no disputing his consistency with the bat this season – 39 here to add to previous scores of 40, 35 and 36. Sutton and Batley took the score to 95-2 at the halfway point, and 200 – and maximum bonus points – didn’t look beyond the home side. Until, that is, the wicket of Sutton (33) prompted a collapse from 100-2 to 113-6, as Harrison, Robinson and Bulusu came and went. Vish lasted a little longer, and Hodsdon might have also, had the burly Marlburian not pulled a muscle in his thigh. All the while, Batley was serenely helping himself to yet more red ink. In taking Camden to a creditable 183-8, the Batman’s 57 not out doubled the number of half centuries the Thirds have managed in six matches this year. 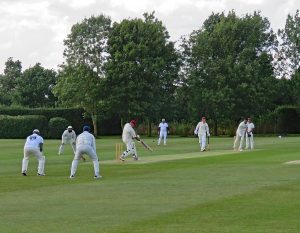 Still, the margin of defeat was narrower than last week, so progress of sorts – and, in their newly arrived caps, the Camden boys at least looked the part. As our heroes queued up to pay their match fees, it was clear that former NFL star Deion Sanders’ famous quote doesn’t necessarily apply to Junior Division 1 North: “If you look good, you feel good. If you feel good, you play good. If you play good, they pay good.”

Man of the Match: Jon Adler 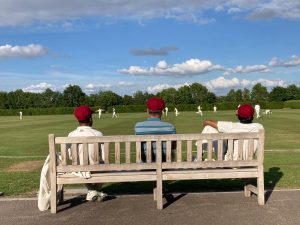