Camden I v Histon III (away)

True team effort too much for Histon

Of all the qualities required in a recreational cricketer, availability is perhaps the most treasured. Captain Redfern was pleased, then, to welcome back Bulusu, Hodsdon, Kelsall and Tarun for the must-win trip to Histon. More good news came at the toss, with the hosts – somewhat mystifyingly – opting to bowl first.

The pitch looked a belter, so Redders – in his last game of the season – promoted himself to open with Sutton. A wayward third over threatened to mess with the skipper’s rhythm, but he was soon peppering the off-side boundary. Running remains anathema, however. Sutton’s observation that a fielder had no arm was countered by Redders claiming to have no legs. Still, the fifty came up in the ninth over and Redders reached the same landmark six overs later with an eighth four. Looking in the mood for more, it was a shame, then, that he was adjudged LBW for 55. But the partnership was worth 89, enabling the captain to turn to maths to justify his decision to break up the Sutton-Adler axis at the top of the order:

As those numbers attest, Adler has been seeing them all right this season, so it was a surprise to see the Big Aussie Unit sporting a pair of spectacles. Slapping a low full toss to point, Adler (10) could barely believe his eyes when a smart low catch was taken. That brought Batley to the crease, which seemed to galvanise Sutton into some rare expansiveness. The former fruiterer had reached 55 when he was caught at square leg, but a partnership of 67 had taken the score to 172-3 in the thirty-second over. Hugo wasn’t finished. With Robbo (13) and Vish (12*) for company, the Batman ran riot – finishing with an unbeaten 79 from just 62 balls, and taking Camden to the cake break with a season’s best 260-4.

Histon’s reply started in disastrous fashion, with ex-Camden man Rob Coe running himself out off the first ball for a diamond duck. Sutton held a catch off Tarun (1-29) shortly afterwards, and the home side were in trouble at 10-2. Their muscular number three could hit a ball, however. So could Kelsall. All the easier when the batsman is mad enough to not wear a box. After the violence, the art – Vish, with his first ball, finding the edge of the bat with the perfect away-swinger. It might have been said that Camden were in the box seat. Batley, meanwhile, found a seat of his own on the boundary to enjoy Redders taking a catch off Vish. With his powers seemingly undimmed after a hair trim, Vish (2-19) bowled his best spell of the season. Kelsall remained wicketless, but could be more than happy with himself – and figures of 0-29 from eight overs. Batley (1-28) then got off his chair to reduce the hosts to 92-5. It was a second catch for Hodders, and the burly Marlburian’s day got even better with two excellent stumpings off the wily leg-spin of Bulusu (2-24). In between, Krishna took a catch in the covers off Adil – who showed great character to recover from conceding twenty from his first two overs. His reward was to take the ninth and final wicket, and it was a beauty. Clean bowled, the off stump pegged back at a pleasing angle. An emphatic conclusion to an emphatic team win.

Regular photographer and Thirds’ founder, John Sutton – preferring a weekend of hot East Midlands sporting fare – wasn’t there to capture any of the action, alas. Redders’ lofted six will just have to live on in the imagination. So too, Sutton’s whip-crack square cut and any number of Batley’s twinkle-toed drives. And the look on poor Rob Coe’s face. Not to mention Kelsall’s ball-busting. And the shape on Vish’s first delivery, the dip of Krishna’s leg-spinners and the Histon skipper, on his back, desperately trying (and failing) to avoid being stumped. All these memories harvested, and this – more than the runs and the wickets, the wins and the losses – is what it’s all about.

Man of the Match: Hugo Batley 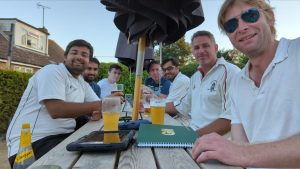