Krishna rediscovers batting form, but Champions too strong for Thirds

Asked to imagine a cricket field, most people will picture a green outfield and a straw coloured pitch. At Caldecote, where Camden were playing Cam Kerala, the inverse was true. This was pitch as oasis. Captain Adler, reasoning that the pitch would dry out, decided to bowl first. It was a decision not without logic, but the chances of it making much difference was undermined by Camden being without a number of irregular bowlers. 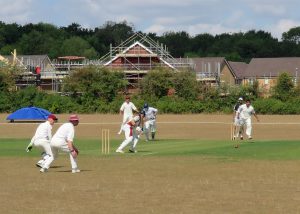 The visitors still had Vish, though. And thanks to Robinson’s spare whites, the opening bowler didn’t have to bowl in his jeans. Nor did he have to wait long for a wicket – Nutt, second ball, making light work of a chance that looked at first like it would clear mid-off. Perhaps it was the strain of carrying the Camden bowling, but Vish suffered a brief dizzy spell in an opening four over burst of 1-11. Adler turned to spin, and was immediately rewarded when Krishna and Prathyush (1-22) struck in their first overs. For the latter, it was a maiden wicket for the Thirds, and the dismissal was the mirror image of Krishna’s earlier scalp – a full toss belted down the throat of deep square leg. Sutton, thankfully, and Vish didn’t have to move. Simple game, this captaincy lark. But it was about to get harder. Cam Kerala would clinch the Junior 1 North title with a win, and weren’t going to die wondering. The hundred came up in the sixteenth over, but Krishna’s leggies and Nutty’s canny old man bowling began to exert some control. Indeed, the veteran’s first four overs yielded just eight runs. Krishna (2-47), meanwhile, bowled a terrific dipping leg break to get rid of the home side’s number three for a classy half-century. Another followed for the number six, brutally and rapidly. The 200 came up in the thirty-second over. The 250 came up four overs later. 273 the final score. Camden had managed to take eight wickets, however. There was a run out for Adler, a wicket for Batley (1-67), and two more for Vish (3-41). Nutt, Krishna, and Robinson took catches in the deep. 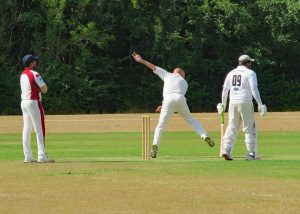 The traditional cake break was further enlivened with samosas and pakoras courtesy of Ramesh. For all the improvements in bowling and fielding that the Bulusu upgrade has brought to Camden, it must be noted that Krishna has yet to adopt this popular feature. Forty overs later, the two Bulusus would be at the crease as this match reached its climax, but no spoilers. Apart from the Cam Kerala bowlers, for being too good. Against some prodigious seam movement, Sutton, Adler, and Extras did well to survive the opening spells. But Sutton (18) played on, and Camden were 48-1 in the eleventh over. Adler and Batley then took the score to 71, before the skipper was bowled for 26. 71-2 quickly become 97-7 by the time Hodsdon (3) had to retire out. The Weymouth-bound burly Marlburian – at the non-striker’s end for the wickets of Batley (12) and Robinson (1), Nutt’s golden duck and Vish’s 9 – had seen enough of everything but the strike. 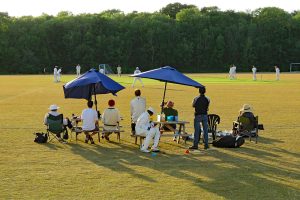 The game was over as a contest, but Camden still had bonus points to play for and the Bulusu upgrade had an opportunity to work on some bug fixes in batting mode. Batting at nine, it’s easy to forget that Krishna came to the club as a batsman. Here was a glorious reminder of the promise the left-hander had shown in an early appearance at Cottenham. It was a style matched at the other end by Prathyush (18), and the pair added forty for the eighth wicket. Twenty-three more for 160 and another bonus point. Time, with six overs remaining, to add more Bulusu into the mix. Nine off three. Eight off two. Six off one. Krishna on strike. The ball laced through extra-cover off the back foot. The tension cut. Stitched back together with three dots. Two balls to get two runs. Krishna (40*) only needed one, driving classically through the covers, the two Bulusus coming back for a second run.

In all the excitement, it shouldn’t be forgotten that the Thirds had lost the match by 113 runs. The gulf  between the two sides was perhaps best illustrated by the modes of dismissal. Four of Camden were bowled, two caught behind, and one LBW. Six of Cam Kerala were caught in the deep, one was run out, and one bowled. But there’s no disgrace in losing to a better team, and it was hard to feel defeated after the triumph of the Bulusus.

Man of the Match: Krishna Bulusu